What Brands and Businesses Should Learn from Joe Biden’s Victory

The US election is not just the business of the United States alone, but the entire world. The stakes are high because of the various interests that come to play in whoever becomes the president. The 2020 presidential elections between Joe Biden and Donald Trump was no different.
While the US elections may have come and gone, the lessons left by this significant event can be adopted by business and brands. We have taken time to examine briefly some of the lessons behind Joe Biden’s victory. These lessons may seem like regular success factors, but Joe Biden uniquely embodies them.

Be bold about what you want

A major lesson from Joe Biden’s victory is being vocal and audacious about what you want. Joe Biden’s campaign was characterised by his audacity to restore the soul of America. It seems like a tall order, but he was set to go all out for it.
Businesses and brands that are scaling at a higher rate are bold about the value they are offering, regardless of how young or old they may be in the business. Thus, brands must cultivate a bold personality, and be clear about the goals they want to achieve per time, as well as the vision and mission of the organisation.
Again, people gravitate towards those who are courageous and clear about their intentions, same way customers follow brands with a clear message. Ambiguity often leads to failure in business.

A major mistake Hillary Clinton and Democrats made in 2016 was underestimating Trump. The campaign manager for Biden, Jennifer O’Malley Dillon, wrote in a memo to donors, “if we learned anything from 2016, it’s that we cannot underestimate Donald Trump or his ability to claw his way back into contention in the final days of a campaign.”
Like the US elections, businesses must study their competitors, understand their strengths, weaknesses of competitors, as well as the reasons behind the failures of those who tried to compete in that space before.
Fast-growing organisations in tech, Agric., finance and other sectors of the economy are those that took time to study the market competition and cultivate proactive measures to be a step ahead of every curve in the market.

A major reason why the black community, especially black women rallied around Biden’s campaign was his unreserved condemnation of systemic racism and white supremacist, which is the number one pain point of people of colour.
In Wisconsin, for example, Biden’s campaign trip focused on the two main themes of his candidacy, addressing institutional racism and strengthening a shaky middle class; beckoning on middle-class workers and criticized Trump’s trade fight with China. These two issues greatly affected the community of people of color, Hispanic and other minority groups.
In the same vein, organisations and businesses must be deliberate about addressing the challenges faced by their target audience and providing solutions adequately. The more proactive about providing a solution to the problem of customers, the more brand loyalty businesses enjoy.

Pick a message and stick with it

All through the elections, Biden and his campaign team held on to a consistent message of, “we have to count the votes,” it does not matter whether they were winning or losing in any of the states. While Trump kept shouting “count the votes” in states where Republican are losing, he says “stop the count” where they are winning. This disparity in attitude and disposition raises the question as regards the character of a candidate.
Brands need to have a clear message and stick to it. While there is room for flexibility in their approach and methodology, brands must be consistent in values and ethics that bind the organisation. Customers gravitate towards a brand that is consistent with their promise.

Biden was seen consistently from all communication platforms projecting confidence all through the elections, even when there was a serious allegation of fraud, “We continue to feel very good about where things stand,” was a continuous message of assurance from the Biden’s campaign. While on the other hand, the lawsuits and unsubstantiated allegations of fraud haven’t projected much confidence from the Trump team.
Brand perception and equity take a positive flight when organisations and businesses celebrate every win. It reduces doubts of prospective customers and consolidates the loyalty of current customers. Therefore, businesses must encourage a company culture that projects their wins, like new affiliations, testimonials, anniversary, and other milestones.

In conclusion, Joe Biden and his campaign team may have personified the above factors leading to his victory in the US election, one critical factor remains his perseverance towards any cause he set his heart to do, and the courage to follow through. His life is characterised by one tragedy or the other, but it never deters him from reaching out to his aspirations. “Failure at some point in your life is inevitable,” Biden said in 2008. “But giving up is unforgivable.” 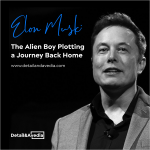 ELON MUSK: The Alien Boy Plotting a Journey Back Home